What Convinced Obama to Reverse His Position on NSA Surveillance? 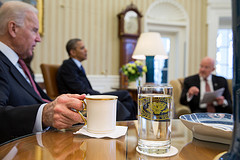 Since details of the NSA’s surveillance programs started coming to light in early June – and President Obama’s been forced to publicly answer for its activities – the president has repeatedly reminded us that he came into office with a “healthy skepticism about these programs.”  But, after careful evaluation, he determined “that on, you know, net, it was worth doing.”

Some of these programs I had been critical of when I was in the Senate. When I looked through specifically what was being done, my determination was that the two programs in particular that had been at issue, 215 and 702, offered valuable intelligence that helps us protect the American people and they're worth preserving. (From his August 9th Press Conference.)

It’s a rhetorical strategy intended to win his critics’ trust by demonstrating that he understands our concerns because he used to share them.  The message he wants us to take away is: if we had been in his shoes and saw the evidence he saw when he got into office, we would have signed off on these programs too.

Well, yesterday we got a glimpse of some of the evidence he saw when he assumed office – at least in connection to the NSA’s collection of U.S. phone call records -- and, it begs the question, what exactly changed his mind about the NSA’s domestic surveillance programs?  What did the President see that led him to the conclusion that everything he had previously said on the topic was wrong because allowing the NSA to collect everyone’s phone call records really is a constitutionally-supported, great idea?

Because, according to the documents the ODNI released yesterday, when President Obama took office, the NSA’s “telephony metadata” program wasn’t getting stellar reviews.  In fact, we now know that days prior to Obama’s inauguration, the NSA reported that it had repeatedly violated the court-ordered rules limiting its use of the data it was collecting.  A little over a month later, a judge on the Foreign Intelligence Surveillance Court found that, “Since January 15 [five days before Obama’s inauguration] it has finally come to light that the FISC’s authorizations of this vast collection program have been premised on a flawed depiction of how the NSA uses” the phone call data.

Not only had the Intelligence Community been misrepresenting its program to the court, the judge, Reggie B. Walton, went on to write:

The minimization procedures proposed by the government in each successive application and approved and adopted as binding by the orders of the FISC have been so frequently and systemically violated that it can fairly be said that this critical element of the overall BR regime has never functioned effectively.

To approve such a program, the Court must have every confidence that the government is doing its utmost to ensure that those responsible for implementation fully comply with the Court’s orders.  The Court no longer has such confidence.

The judge also implied that – other than hypothetical examples of how this data might provide intelligence of “immense value to the government” – the government had yet to provide the court with concrete evidence that the program was actually providing that value.

This program has been ongoing for nearly three years.  The time has come for the government to describe to the Court how, based on the information collected and analyzed during that time, the value of the program to the nation’s security justifies the continued collection and retention of massive quantities of U.S. person information.

Again, Judge Walton reached these conclusions based on evidence that was available to him at the very same time that I imagine President Obama and his team were evaluating these programs.  Plus, I’m assuming the president considered Judge Walton’s opinion in his evaluation, right?

So, what exactly convinced President Obama that this was “worth doing?”  Because as the president explained last month, the prospect that something could happen isn't the same as actual evidence that it has or ever will.

My writing is made possible by your support.  If you would like me to keep writing, please consider making a donation so I can afford to keep doing it.  Thank you, in advance, for your support.
Do you like this post?
Tweet